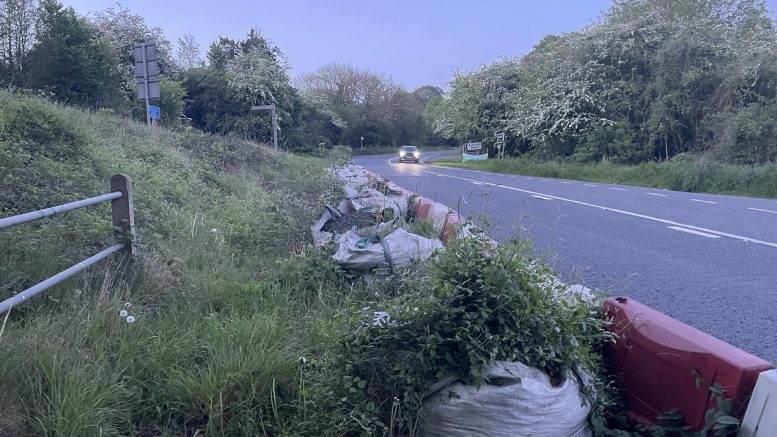 A HEREFORDSHIRE layby which was temporarily closed around 10 years has turned into an eyesore, locals have said.

People in Bromyard have been voicing their concerns over the closed layby on the A44 Worcester Road, at the junction with the Downs road.

The layby was closed around 10 years ago, blocked up with bags of gravel and red and white plastic bollards.

But after so many years, the layby is now covered in trees and bushes, with the bollards started to fall to piece.

Ray Ray Whittaker, who lives in the town, said he and other locals had been on Herefordshire Council’s back to come up with a more permanent solution for 10 years, but nothing has yet been done.

He said: “All the bollards are falling to pieces, they’ve been attacked by UV rays. As plastic does, it just crumbles.

“There are weeds and even small trees and bushes growing in those gravel bags.

“It is an absolute eyesore, it’s worse than an eyesore.”

The layby on the A44 Worcester Road near Bromyard is becoming an eyesore, locals say

Herefordshire Council said the layby was closed “several years ago at the request of the previous ward member and the parish council”.

It said this was in reponse to safety concerns, with lorries reducing visibility of cars turning onto the A44 from the Downs road, near Brockhampton Primary School.

Coun John Harrington, cabinet member for infrastructure and transport, said the council was looking for a permanent solution, and minutes from the Brockhmapton Group Parish Council reveal locals have already asked for it to be permanently closed.

“As ever, with the serious cuts in Government funding, we needed to balance risk with priorities on the network,” Coun Harrington said

“A solution was found quickly that worked well but is now beginning to deteriorate and we are looking at the cost of a permanent scheme.

“While the sandbags did their job quickly and economically, it is time to look for more permanent infrastructure here and the current ward member, Coun Nigel Shaw, along with parents from the local school have been pressing for that over the last 18 months.

“The council and its partner, Balfour Beatty Living Places (BBLP), is continuing to work closely with Brockhampton parish council on establishing a long-term solution, as well as on the ongoing upkeep of the lay-by.”