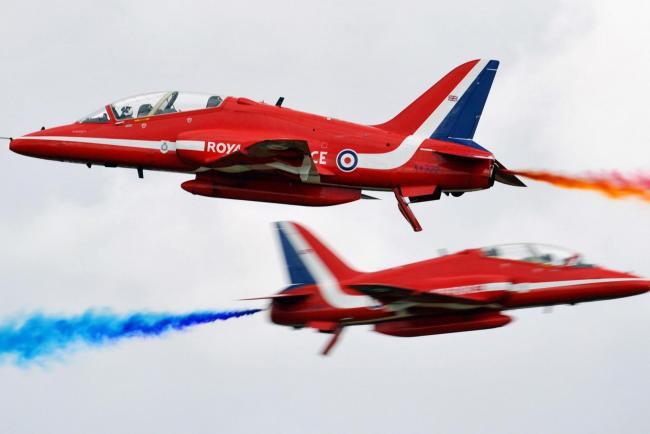 THE world famous Red Arrows display team will be seen flying over the Herefordshire border later today as they make their way to the Midlands Air Festival.

The Royal Air Force display team will be flying over Malvern and Tenbury Wells in Worcestershire, meaning people living in the east and north east of Herefordshire will have the chance to catch a glipse.

The jets will set off from RAF Fairford in Gloucestershire at 6.05pm, according to military-airshows, and will be seen to the west of Great Malvern, towards Herefordshire, at 6.13pm.

Just two minutes later they will be north-east of Tenbury Wells.

At 6.20pm they will be at the Midlands Air Festival.

They will also be at the festival on Saturday, meaning they will be seen west of Great Malvern at 12.53pm and north-east of Tenbury Wells at 12.55pm.

“The RAF Red Arrows are one of the finest and most respected jet aerobatic teams in the world and the nation’s favourite wherever they display in the UK,” organisers of teh festival in Warwickshire said.

“Arriving in the sky over the historic Ragley Estate, they will showcase their new arrival formation for 2021 called ‘The Wall’.

“The team will then display a series of different formations with their wingtips just a few feet apart, before breaking into two sections for the dynamic part of their show, featuring nail-biting high-speed opposition passes and spectacular breaks.”

The Red Arrows represent the speed, agility and precision of the RAF, it says.

The Red Arrows assist in recruiting to the Armed Forces, act as ambassadors for the UK and promote the best of Britist.

Flying distinctive Hawk fast-jets, the team is made up of piolts, engineers and essential support staff with frontline, operational expereince.

Based at RAF Scampton is Lincolnshire, the Red Arrows have been displauing since 1965.