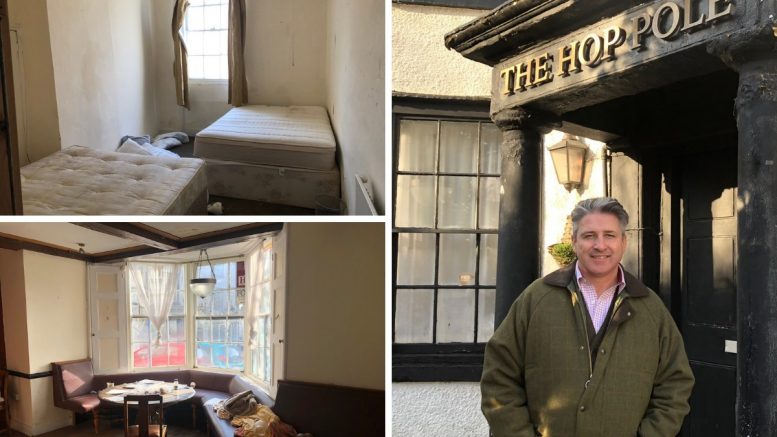 THE Department of Transport is considering allowing a Herefordshire hotel, owned by millionaire Alfie Best, to build an extension on a public highway.

A draft order has been published to “stop up” a part of Rowberry Street in Bromyard, meaning the highway land would no longer be a part of the highway.

The land, to the rear of the dilapidated Hop Pole Hotel in Market Square which was bought by Wyldecrest Parks boss Alfie Best in 2019, is a footpath to the southern side of Rowberry Street.

The draft order, which can be objected to until May 5, said it would allow development to be carried out, if plans are given the green light by Herefordshire Council.

Plans from Nick Joyce Architects, which were said to be on behalf of Essex-based Wyldecrest Parks, showed a larger single-storey flat-roofed extension was proposed for the rear of the building, which backs onto Rowberry Street.

It was needed for access to the newly-discovered basement, which could be turned into a dining area.

The highway to be stopped up starts at the northernmost point of hotel and extends in an easterly direction for a maximum of 3.6 metres with a maximum width of 2.85 metres, the draft order published by the government department said.

Even if the plans go ahead, it would not affect the flow of traffic on the one-way street.

The Hop Pole Hotel in Bromyard has been a long-decaying sight in the town’s Market Square, with planning permission for an extensive internal refurbishment applied for.

Alfie Best, founder and chair of Wyldecrest Parks which own Sapey Golf and Country Club and Saltmarshe Castle Residential Park nearby, bought the hotel in 2019 and said the refurb would save the “dying town”.

The whole application, sent off to Herefordshire Council, said internal alterations, including the conversion of attic space and additional rooflights were also needed – which Mr Best, who featured in ITV’s Undercover Big Boss in August, previously said was so more rooms could be created.

There would also be a ramp to the front door for disabled access and an historic window would be reinstated.

The plans also said that there were no bats or nesting birds found within the building in April 2021, and there was a sustainable drainage strategy drawn up to prevent contributing to the high levels of phosphates in the river Lugg catchment area.

Plans have also been drawn up to minimise the impact on the local transport network, which should also give customers a choice of transport, including walking, cycling and buses.

A Grade II-Listed building, the plans for the hotel aim to “conserve and enhance the historic environment”, the architect working on the scheme said.

After buying the hotel in 2019, Mr Best – named the 382nd richest person in Britain in the Sunday Times Rich List in 2020 – said he would plough £1.2 million into the hotel, some of which would come from the profits made at Saltmarshe.