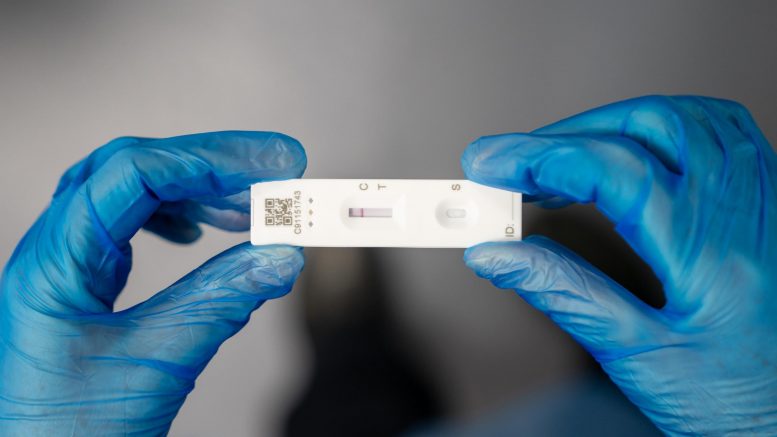 THE first two cases of the Omicron Covid variant may have been found in Herefordshire, latest data from the Government suggests.

The UK Health Security Agency said two coronavirus cases had been found in the county with S-gene target failure (SGTF), which indicates when a case is likely to be the Omicron variant.

It can take up to 14 days for the variant to be confirmed, but the test for S-genes is much quicker.

Explaining the difference, the UK Health Security Agency said the Delta variant – currently the most common strain – tests positive for S-genes, whereas the new Omicron variant does not.

Herefordshire Council’s public health team has been contacted for comment, but government figures show the tests were taken last week.

The result is expected next week.

On Friday, an additional 448 confirmed cases of the Omicron Covid-19 variant have been reported across the UK, the agency said.

It took the total number of confirmed Omicron cases in the UK to 1,265.

It came after Boris Johnson announced a move to his Plan B to tackle coronavirus, with work-from-home guidance returning, Covid health certificates becoming mandatory in large venues and mask rules will be extended to combat the Omicron variant.

The Prime Minister warned it was clear the new strain is “growing much faster” than Delta, and cases of Omicron could be doubling every two or three days as he strengthened England’s rules.

Mr Johnson said Christmas parties and nativities could go ahead, but urged people to “exercise due caution” and get their booster jabs as he came under pressure over allegations of a rule-breaching festive bash in No 10 last year.

Mandatory mask-wearing will be extended to indoor public venues including cinemas, theatres and places of worship from Friday but will not be required in pubs and restaurants, while the guidance to work from home where possible will return on Monday.

The NHS Covid pass, which can be obtained by having two vaccines or a negative lateral flow test, will be introduced for entry into nightclubs and other large venues from December 15, as Mr Johnson set out the “proportionate and responsible” measures.

On Wednesday, the UK Health Security Agency published data for the first time that showed the cases found with S-gene target failure (SGTF) in recent weeks across the country.

And in an update on Friday, two SGTF cases had been found in Herefordshire.

Around half of PCR tests, those processed by laboratories, in the UK are able to detect SGTF, it said.

It also said: “SGTF is a useful indicator of the presence of Omicron, because as a rule, Delta cases have the S-gene and Omicron cases do not.

“However, it is not confirmatory as there are a number of other reasons that a sample might exhibit SGTF.

“For example, there are still a small number of cases of other variants, such as Alpha, in the UK which would also result in S-gene dropout or there is a lower amount of virus present in the sample where S-gene dropout cannot be confirmed.”

Evidence continues to show that Omicron is transmitting more rapidly than the dominant Delta variant, health chiefs have warned.

The UK Health Security Agency chief medical advisor Dr Susan Hopkins said: “It is increasingly evident that Omicron is highly infectious and there is emerging laboratory and early clinical evidence to suggest that both vaccine-acquired and naturally acquired immunity against infection is reduced for this variant.

“It is therefore absolutely critical that we all do everything that we can to help break the chains of transmission and slow the spread of this new variant.

“Vaccination is critical to help us bolster our defences against becoming severely ill from this new variant – please get your first, second, third or booster jab without delay. Please also make sure to follow all Government guidance to reduce the spread of infection.

“It remains vital that anyone with Covid-19 symptoms isolates and gets a PCR test immediately.”

The UK Health Security Agency said vaccine effectiveness against severe disease from Omicron was not yet known and would not be available for several weeks.